Imagine that you kissed your boyfriend or girlfriend in school and just one other person saw it, only one other person and now everybody is talking about it. You suddenly feel you are the talk of the town and you got many eye balls rolling and many gossip mills churning. What a classic act of viral marketing!

An effective viral marketing campaign is just like that.

For a marketing campaign to work, it should have one core central idea that should be simple enough to understand and yet strong enough to drive home your point. All your viral marketing strategy, campaign, line of communication, artworks should cohesively work together to convey (or tell) that idea to your audience.

Important thing to note here are two important attributes, first, your idea/message and second, the traditional or digital platforms best suited to you that you use to communicate the idea to your audience. The message should be like that kiss which is sure to turn heads, draw eye balls and prick up ears and the mode of communication like that one other person who will surely make it go viral.

Let me give you an example that is quite close to my heart, Volkswagen Beetle. Close to my heart because I loved that car whenever I saw it on road and I was really heart broken when the car was discontinued. Here is one of the Volkswagen advertisement that qualifies as a best example of viral marketing in those days when print ads were a champion! 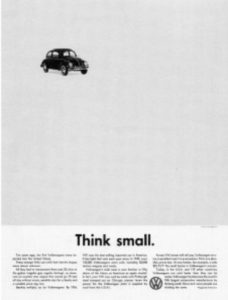 In 1959, Volkswagen Beetle with DDB in the US printed an advertisement with the tagline ‘Think Small’. Now immediate reaction of a reader/listener would be, why think small? People talk about thinking big or different or out of the box but why small? Next you must look at the ill placed logo, somewhere between the text. Any graphic designer will fight ends with you on not placing it there. The mode of communicated was then of course a print ad in a newspaper, but it was an oddly designed advertisement, printed in black & white against all other coloured advertisements. All the elements of this advertisement makes one stop, take time and take notice. What a simple ingenious advertisement made to go viral, isn’t it?